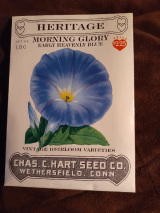 Morning glories are native to Mexico. In the early 1600s they were introduced to monasteries where the monks frequently used them as inspiration for the decorative borders of their manuscripts. 'Heavenly Blue' was first found by a home gardener in the early 1900s and quickly became the most popular morning glory. Soak seeds in water for 24 hours before planting in the spring after last spring frost. They will reseed year to year all by themselves.